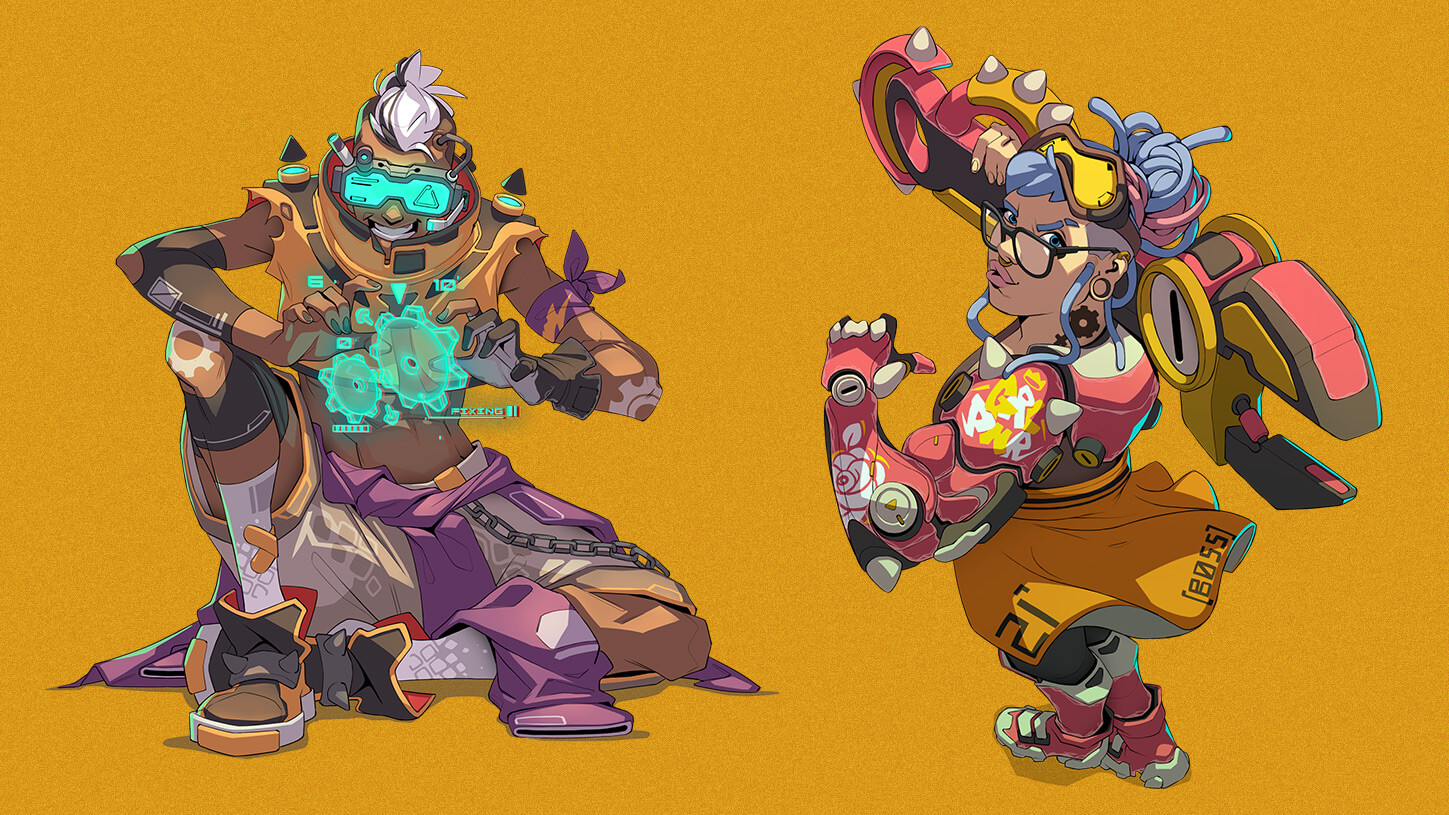 The Story of Bernadette & Hagbard.

Bernadette Gleason was born into an industrious family tribe of salvagers, engineers and mechanics. She grew up in one of the large post-industrial megacities of the world, which like so many others, had fallen into ruin and disrepair after the great cataclysm and the “RE:initialization”. There were many mechanical treasures and machines to be found in the abandoned and derelict industrial warehouses, production plants and factories. From a young age, Bernadette joined her family hunting for long forgotten machines and obsolete technology, salvaging all kinds of machine parts, components, metals and alloys. Bernadette has always loved getting her hands dirty and greasy with machine oil!

Her natural affinity for machines and technology combined with the expert resources and knowledge of her family, moulded her into becoming a masterful mechanical engineer. To this day, she delights in re-engineering obsolete machinery and components, giving machines, robots and droids a second life through careful repairs or by transforming them into something new and highly usable again. True to her name, she is strong as a bear, and delights in carrying around the biggest wrench in the scrapyard like it weighs nothing. Tough and strong, she fears no one, perhaps having been tempered in the many moshpits of the post-industrial, post-apocalyptic punk rock scene she has been part of since her youth.
Bernadette was using the Deep Sky Network to look for information on rumoured legendary blueprints of powerful “pi technology” and met Hagbard Kron at a Deep Sky congress of technology enthusiasts and hackers. Bonding over their shared interest in the mysterious tech, they set out to discover clues when they both #glitched. Their determination and conviction that a solution might be found in the blueprints, soon attracted other like-minded Glitches who joined them and would eventually go on to become the Adamant Hands syndicate.

At the Adamant Hands, Bernadette and Hagbard specialise in building and fixing robots, droids and all kinds of other machinery. They are a formidable team and complement each other very well: She takes care of the hardware and he takes care of the software. Bernadette loves tracking down rare components and technologies because it brings back good memories of her childhood. She is still closely following the rumours about the blueprints and legendary machines that brought her into the network in the first place. No longer just rumours, there are now credible reports of an unknown and mysterious technology that is scattered all over the Deep Sky Network in secret vaults and hidden caches.

In a fight Bernadette is fierce, determined and often surrounded by her battle droid creations and heavy machinery.

Should you dare to attack her and somehow break through the ranks of robots, droids and machines protecting her, we hope you brought a big enough weapon!

From a very young age Hagbard Kron was fascinated by technology and software. While other kids his age asked their parents for the flagship models of popular computer technology brands, he would study the current components available on the tech market, make his own blueprints and build his own optimised devices, going as far as running custom designed modifications of operating systems and all kinds of non-standard software. He was supported and brought up by his tech savvy aunt who taught him how to code. Some of his fondest childhood memories are playing computer games and visiting tech markets with her. Through his interest in coding, he gradually evolved into a masterful developer and stealthy hacker, while also developing a keen interest in network theory and decentralisation.

At the time of the Deep Sky Experiment, Hagbard was part of a group of white hat hackers that were studying the new underlying technology and software needed for the creation of the network. If the Deep Sky was to become the next internet, then master hackers like Hagbard needed to learn and understand everything about it. He was captivated by the mystery of “pi technology” and became very intrigued about rumours that more mysterious technology and blueprints were said to be hidden away somewhere deep within the network. When he met Bernadette at a pi technology conference held within the Deep Sky Network, he quickly recognized that her affinity for technology and outstanding skillset as a mechanical engineer was the perfect match for his code engineering master expertise.

At the time that Hagbard and Bernadette #glitched, they were on the hunt for clues about pi tech blueprints. Initially bewildered yet strangely fascinated with their newfound state of being, they continued their pursuit for the mysterious technology, because they understood that the only possible way out of their situation could be found through understanding the mysterious technology, if it was possible to find a way out at all. During that time, they forged a strong bond and became a formidable team. When conflicts over resources with other Glitches started to become an issue in the network, Hagbard and Bernadette connected with like-minded individuals, forming a small group that, inspired by network theory and decentralisation, would eventually grow into the industrious Adamant Hands Syndicate of today.

There is something wonderful about Hagbard, it is his curious attitude when looking into fixing or building something. He is always enthusiastic and never sees problems, only challenges to overcome. Bernadette mentioned she has never seen him truly angry. Sometimes he can be a bit too playful or distracted and she has to get him back on track leading to all kinds of hilarious, sarcastic but ultimately loving banter between the two.

On the battlefield, he is a stealthy and masterful hacker, using exploits to tear down enemy defences and employing trojan viruses to take over control and wreak havoc among enemy ranks.

Are you sure that your cybersecurity defences will be enough to protect you against this master hacker’s attacks and exploits?