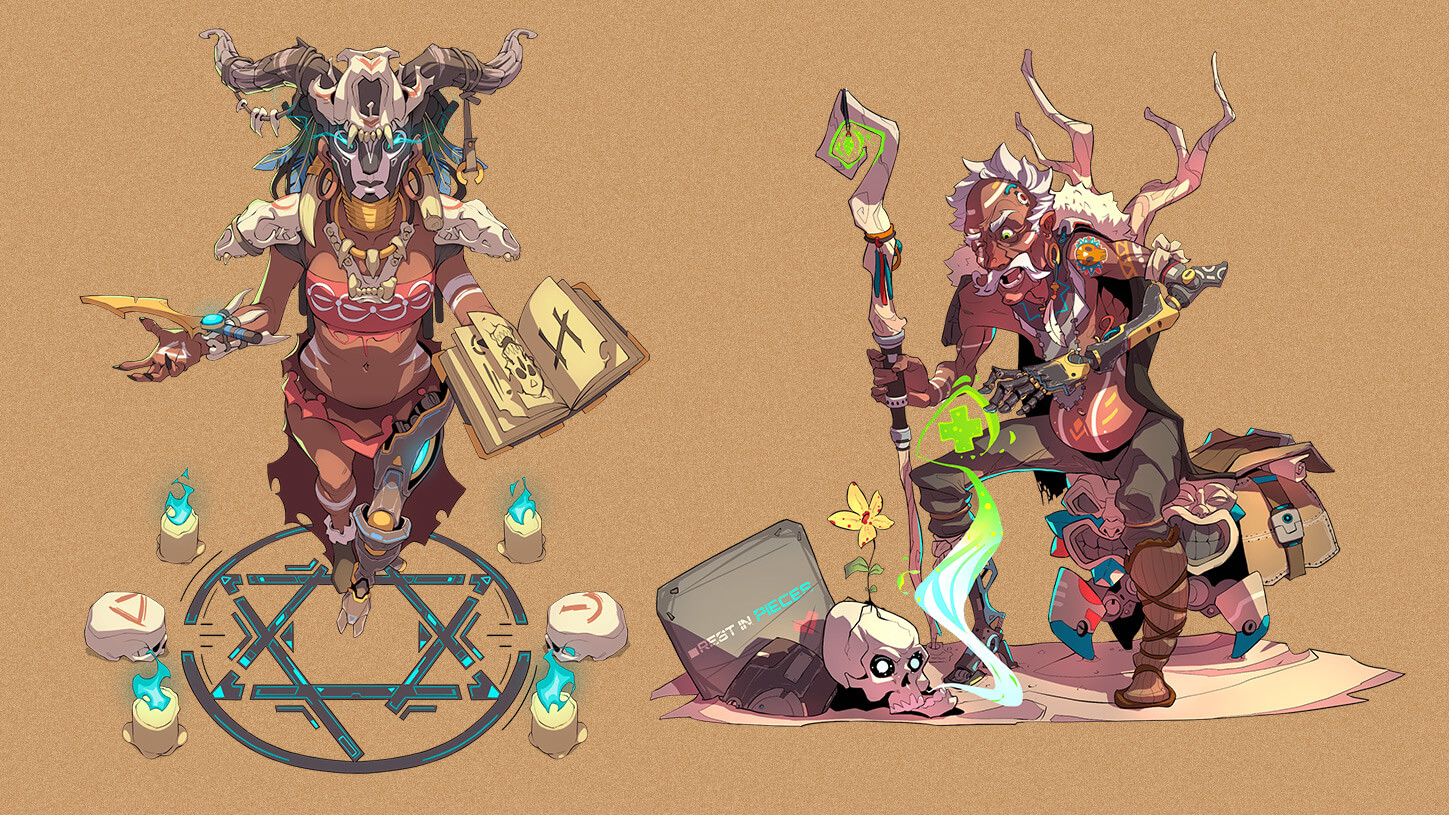 The Story of Luana & Ekene.

Luana grew up among the Amazonian mega tribe that had formed from the remnants of the survivors of the great cataclysm in the era that became known as the “RE:Initialization”. She comes from a long lineage of healers, diviners, summoners and soothsayers, the craft and knowledge having been passed down in the different tribes to chosen individuals for many generations. Using magic seals and ancient invocations, her specialty lies in summoning spirits from other planes of reality for all kinds of protective but also frightfully destructive purposes should the situation call for it.

When the great cataclysm wiped out 60% of all of the planet’s inhabitants, with the old structures of power dissolving, the survivors of the tribal and indigenous communities, that were scattered across the globe in small pockets, saw a chance to band together and come out of the situation stronger than ever before. They had a common goal of preserving and protecting the environment and preserving their tribal cultures, customs and way of life. Over time, out of this alliance of many different tribes, gradually a united earth tribe has evolved.

Luana was one of the special tribal envoys representing the Amazon in the global earth tribe council which used the Deep Sky Network to liaise and coordinate with other tribal envoys from other regions of the world, such as her friend and representative from Africa, Ekene. Through coordinating their efforts and supporting each other, the delegates achieved remarkable progress for their cause. She was in a council meeting when she and all the other council members unexpectedly glitched.

Luana is keenly aware that her existence in the Deep Sky Network is just another dimension of existence, and like so many of the other dimensions she has visited, has a set of underlying rules that can be bent and its hidden mechanics used advantageously by those who have obtained the knowledge that pierces through the veil of wordly illusions. Together with most of the other council members she joined with the Curators Maxima syndicate and is now one of its spiritual leaders. Through their combined knowledge and power, they created a form of digital shamanic practices and her summoning powers are just as powerful within the network as they were in the real world before she glitched.

On the battlefield Luana can summon frightfully dangerous and wrathful creatures that drive fear and despair into the hearts of her enemies. You don’t want to stand in her way!

Ekene grew up in a family of traditional healers in the African mega tribe that formed as people re-organised themselves during the period that is known as the “RE:Initialization”.

He is a holistic and spiritual healer, who heals by restoring the energetic balance within people and has a large wealth of knowledge about medicinal healing plants and other herbal remedies. Ekene was born in the West Africa region into a family of traditional herbalists and initiated healers who understand that there is an invisible dimension of energy in which we are immersed and that ultimately organises and influences all of physical reality, including life force and health as well as illness and death. Ekene has gained advanced knowledge of this energy through entering supernatural realms and other dimensions intertwined with our own and through communicating with his ancestor spirits. His kindness and compassion has also attracted a great number of spirit allies from different planes of reality, which support Ekene and lend their powers to him.

He, Luana and the other members of the earth tribe council that joined the Curators Maxima were instrumental in establishing and enabling a form of digital shamanism in the Deep Sky Network. The collective, combined knowledge from real life experiences and sacred knowledge that had been protected, kept and passed on by indigenous tribes all over the world for millennia, once channelled through the code of the Deep Sky, enabled them to extract a mighty source of energy that the Curators Maxima call “krag”. Ekene was the first of the group to learn how to extract it and passed on his knowledge to other shamanically inclined members of the Curators Maxima syndicate exclusively.

He has since become a master at extracting krag and has formulated a theory that it is a digital representation of the energetic potential of pi cell technology within the network. Depending on how it is used, krag can heal the wounded, give powerful boosts to glitches’ abilities, be used to build all kinds of things, recharge batteries of machinery or be utilised as ammunition in energetic weapons. Krag is so universal that it is also possible to simply use it as a source of light.

Ekene has a special power to infuse inanimate objects with krag and make them come to life, as he did with his assistant mule creature that is said to be possessed by one of his most powerful allies in the spirit world.

He is a very powerful healer on the battlefield. With him by your side you’ll be next to invincible!