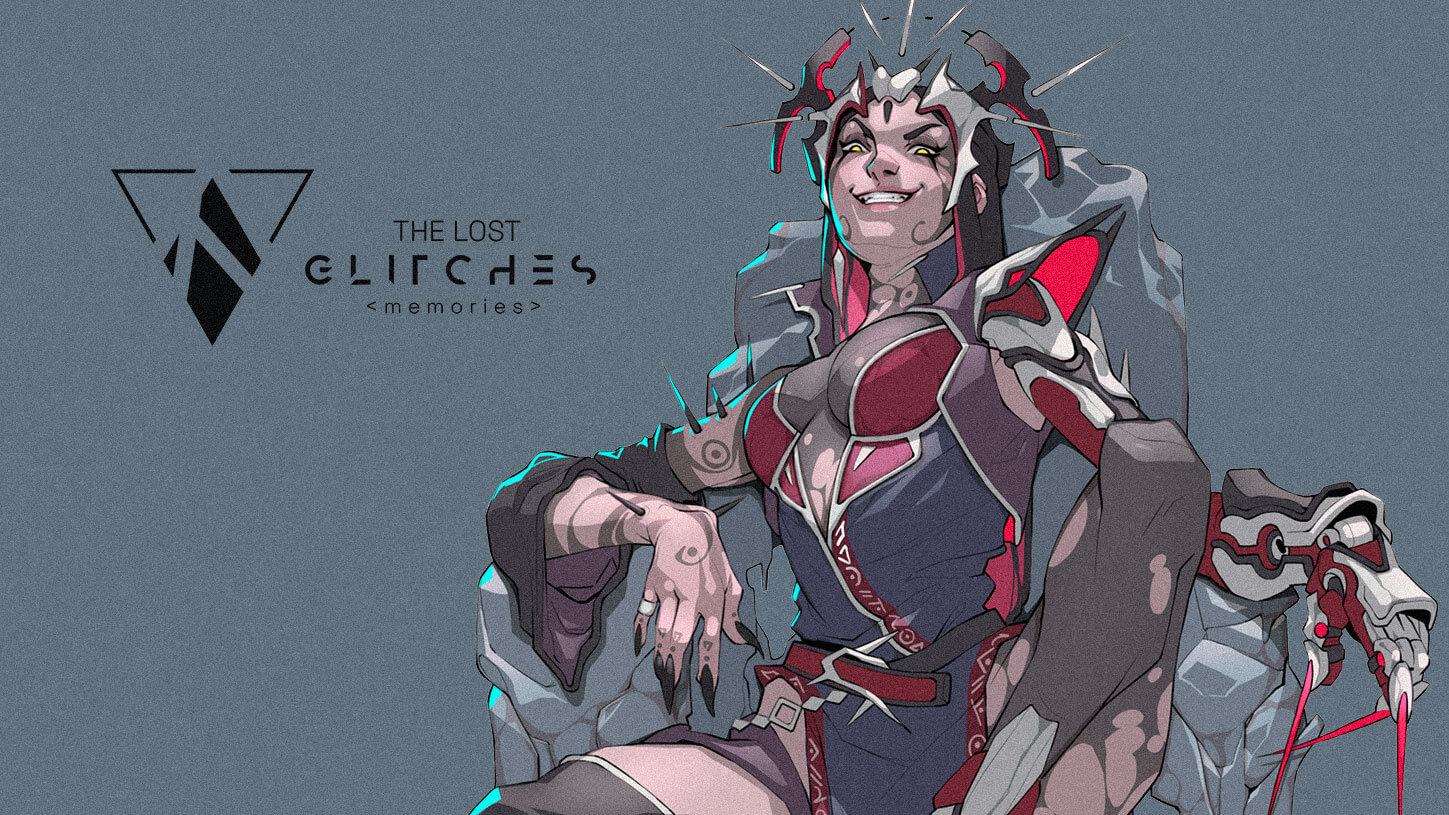 If you are as excited as we are and have been ready to start building your deck since the first sneak peaks of the Spirit Forager and the Glitched Eye were shared in Spring this year, we got great news for you!

We are almost there! The drop of our first set of cards called “Memories” is just around the corner! In order to help you abide the time until the drop, we prepared a practical guide for you, in which we are explaining all the different types of cards, abilities, talents and most important keywords concerning the upcoming set.

The first set of The Lost Glitches game is called “Memories”. Memory space is a highly sought-after and very limited resource in the Deep Sky Network that Glitches fight to their deaths for as you may remember Kyra the Spirit Forager telling you in our first gameplay demo trailer!

The set consists of two types of cards: Glitch Cards and Software Cards.

Glitch Cards feature the inhabitants of the Deep Sky, formerly real people connected to the network who due to a deadly glitch in the system permanently got stuck in it as mental ghosts and former shadows of themselves and are now called The Lost Glitches.

Glitch Cards consist of 15 subtypes, three for each of the five syndicates that represent their main internal factions. The subtypes per syndicate that have already been announced are listed in the following table:

The world of the Deep Sky is dynamic and ever changing. You can look forward to even more factions (subtypes) joining the different syndicates!

Software Cards in contrast to Glitch Cards have no power or defensive values and leave the battleground again immediately after their effects have taken place. They consist of two subtypes, “Plug and play” and “Installation required”.

“Plug and play” are Software Cards that can be played at any time during the battle.

“Installation required” are Software Cards that can only be played and activated when a player is not currently attacking.

Let’s have a look at the plug n play “Mindless Fury” card.

It costs 2 energy to initialise on the battleground and gives your Glitches a buff that makes their attacks +1 stronger and will ensure they attack the enemy if they are able to.

Let’s contrast that with the “Installation Required” Final Strike card.

It costs 2 energy to initialise but can only be initialised outside of the Attack Phase. The card gives all your Glitches a very significant boost in attack power immediately.  Make sure to make it count because all affected Glitches will die at the end of the round!

To sum it up: “Plug and Play” cards can be played at any time during the battle if the player has enough energy resources while the “Installation Required” cards can only be played while the opponent is not in the attacking phase. That means the “Plug and Play” software cards can hit and surprise an opponent out of nowhere, whereas the “Installation Required” type gives the opponent the opportunity to anticipate and prepare for the effects that the software will cause on the battlefield.

The abilities of Glitches are distinguished between activated abilities, triggered abilities and passive abilities called talents. They are the way in which each Glitch uniquely interacts with the game mechanics and are often based on a Glitch’s personality.

These are Glitch abilities that a player can choose to activate and often come with an activation cost in energy but can also be activated through other forms of payment (i.e. pay with life, sacrifice a Glitch, and so on.)

Let’s take a look at Alden the Soul Reader’s card stats and his active ability. He is a Glitch belonging to the Song of the Chain syndicate.

After initialising him, the player can choose to activate his ability to de-initialise a targeted enemy Glitch. Remember, just because Alden, in his function as Deep Sky’s portal keeper, welcomes everyone entering the Deep Sky Network as a Glitch, does not mean he will hesitate a second to dispatch you again in the heat of the battle! Once his ability is activated at a cost of 3 energy, the targeted enemy Glitch of the opponent gets returned to the opponent’s hand. The cost is only 2 energy if a targeted opponent’s Glitch was initialised in the current turn.

These are abilities that are only activated when a specific event occurs, often unique to each card.

Let’s take a look at Taryn Spikes the Acupuncturist for an example of a triggered ability. She is a Glitch that Alden the Soul Reader has grown very fond of as they are both Magus and belong to the same syndicate.

Her card has exactly the same stats as Alden the Soul Reader’s: 2 energy cost to initialise, 2 attack power and 2 health.

Apart from her general badassery, throwing deadly needles and using her terrifying and razor sharp claws, she also has an ability that gets activated the moment she is initialised onto the battleground. The player must pay 1 memory each time they wish for her to sink her needles into an opponent (dealing 1 damage each time), they can do this 4 times, after the 3rd activation all damage done is doubled.

Here are some more examples of triggered abilities where the ability of the Glitch is triggered whenever an allied Glitch dies.

Let’s say Alden the Soul Reader kills an ally of Ekene the Shaman Harvester. Ekene knows how to harvest and absorb the life force of his fallen allies, so if the Shaman Harvester still has 3 health when the ally is killed, he will gain 2 health and have a total of 5 health points.

You can see how if this kind of scenario repeats over and over again, he could become extremely resistant to enemy attacks over the course of several turns.

Imagine for a moment that Taryn the Acupuncturists attacks and kills one of the allies of Kyra the Spirit Forager. Having her on the deck will allow you as the player to draw another card from your deck. Should the scenario repeat and repeat, you as the player will have a lot of cards in your hand to play during the match.

Now imagine you have both, the Spirit Forager and the Shaman Harvester, initialised on the battleground, and you would have a pretty powerful combo!

IMPORTANT: The Lost Glitches game is in active development and all card functions are subject to change.

The rarity icon can be seen above the card description.

Talents are passive abilities and always active regardless of trigger conditions. Cards can also be granted talents. They occur in every single syndicate but benefit specific play styles.

Overflow: Glitches with the Overflow talent deal any damage above a blocking Glitch’s health directly to the blocking player.

Predictive Strike: Glitches with this talent have first strike capabilities and strike at enemy units at the start of a combat round before any other units can react. If an opposing unit dies, the Glitch who took the first strike takes no damage.

Surge: Glitches with the Surge talent are unstoppable and can only be blocked by units that have a Surge talent to match their powerful attacks.

Extraction: All damage done by this Glitch is regained as life for the player. Glitches with this talent are akin to vampiric leeches sucking the life force out of the opposing army, and transform their life force to make their own party stronger.

Infected: If this Glitch damages another Glitch in battle, that Glitch is a goner as it gets infected with deadly malicious code and dies at the end of the turn. Use this Glitch to attack key enemy Glitches and wield plague-like devastation on the battleground. If you are defending against a Glitch with this talent you will want to eradicate this source of contagion as fast as you can!

Regenerate: If a Glitch is not killed in battle, the Glitch will regenerate all lost health at the end of the turn and be completely unscathed, as if nothing happened to it at all. If you have a Glitch with this talent you will want to keep the Glitch alive as long as you can to deal damage with it over and over again. If you are the opponent you will want to get rid of this Glitch as quickly as possible!

Protector: The tank of Glitches on the battleground. Able to absorb a lot of damage through its defensive capabilities but unable to attack.

Aggressor: A Glitch with this talent is a glass cannon on the battleground, able to deal very high damage but unable to defend itself and thus not able to withstand much damage. You will want to think of additional ways to protect this Glitch!

Mirror: An eye for an eye! Glitches with this talent will reflect all damage they receive back at the attacker. Think twice before attacking a Glitch with the Mirror talent, because you will receive back exactly the same damage you dealt!

Bit Thirsty: Glitches with the Bit Thirsty talent can tap into battleground and absorb a mighty stream of bits to quench their thirst for power! They receive +1/+1 whenever they attack.

Troll: Get your inner troll on with a talent that on attack lets an allied Glitch decide which opposing unit blocks. Troll is a fantastic talent to exploit weak spots in the enemy army’s ranks!

This section lists all of the most important keywords in regard to taking turns in the battlegrounds and playing your deck.

Initialise
To play and place one of your hand’s cards onto the battleground.

De-Initialise
Returning a card from the battleground into the hand of its owner.

Hand
The cards currently in the player’s hand.

Terminated
Cards that are no longer in play due to either having been killed or used.

Deck
The card selection to be played during the game.

Stack
The order in which cards are played

Staggered
When a glitch is staggered, it can’t attack or block during that turn.

The arenas in which players send their Glitches to battle against opponents.

Energy
The core currency for performing actions in the game.

Health
The amount of damage a Glitch Card can take before dying.

Cost
The cost in energy you have to pay before taking an action. This can be the cost to initialise cards or the cost of Glitches’ abilities.

Activate
When a card is played or an ability is used.